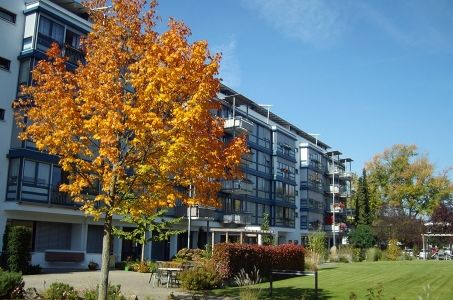 1837: Founding of a reform school for small children in Karlsruhe
After 1844: Training and delegation of nurses for children
1906: Re-named into Mother House for Children's Nurses
1925: Re-named into Protestant Deaconess House Bethlehem, membership in the Kaiserswerther Verband and founding of a seminar for kindergarten teachers, establishment of sewing schools
1942 and 1944: The Mother House was bombed out
1944 – 1946: The administration and the sisters of the Mother House find accommodation at the retirement home for sisters in Gernsbach-Scheuern
1946: A community hall is rented at Blücherstrasse in Karlsruhe - expansion of the training and of the work with children
1966 – 1968: Construction of a new building in the north-western part of town, Friedrich-Naumann-Strasse 33, with Mother House, boarding home, Professional School for Social Education and kindergarten, acceptance of the operational sponsorship for the take-over of the day home for schoolchildren, which had been built by the City of Karlsruhe in the north-western part of town
1982: Employment sponsorship for about 200 nursery school teachers who work in kindergartens and other socio-pedagogical institutions mainly in the area of Badische Landeskirche (Regional Church of Baden) is transferred to local sponsors
1990: Retired deaconesses move from Gernsbach-Scheuern to the Mother House in Karlsruhe
1995: Sponsorship for the Professional School for Social Education is transferred to the Regional Church, the sponsorship for the kindergarten to the Kirchengemeinde Karlsruhe (church community)
1998 – 2000: Redevelopment, reconstruction and expansion of the Mother House
2000: New beginning as Mother House with a residential complex for senior citizens – assisted living

Back to the overview