You are here: Home > News > News > Kaiserswerther Generalkonferenz about the potential of togetherness in turbulent times

Kaiserswerther Generalkonferenz about the potential of togetherness in turbulent times 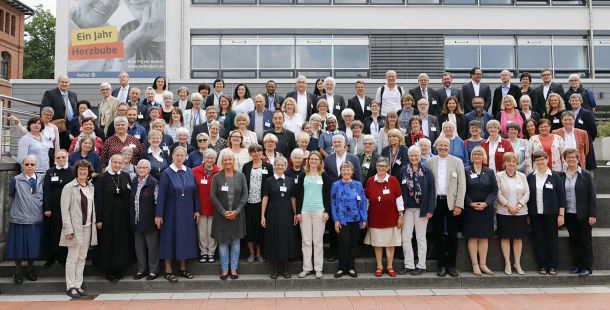 "Community – more than ever! The potential of togetherness in turbulent times" was the motto of the 43rd Kaiserswerther Generalkonferenz. From June 14 through 17, 2018, 117 executives of the more than 100 member institutions from 13 countries met for the conference at the von Bodelschwinghschen Stiftungen in Bielefeld-Bethel.

"In a time of political and economic turmoil, where self-interest, consolidation of power and maximization of profits shift the focus on the well-being of the individual instead of the common good, where black-and-white answers become more and more frequent and increase marginalization and foster fears, we are setting a contrast with a conference that is all about community and crosses all borders", said KGK Secretary General Christa Schrauf: "This contrast focuses on peace, dialogue, reconciliation, fairness and the preservation of the creation and wants to provide broad space for God's love of mankind."

Charity, spirituality, tradition and innovation are "fundamental cornerstones for facing the challenges and hardships of our time", said the Chairman of the Board of the von Bodelschwinghschen Stiftungen Bethel, Pastor Ulrich Pohl, in his welcome address. This is what Diakonie based on the Kaiserswerth model stands for.

It was possible to engage two internationally renowned scientists as keynote speakers. Prof. Dr. Christina aus der Au, Zurich, talked about the topic "The learning community: community and education – passing on values". Whether a Christian Diakonia links its motivation to the Christian spirituality of its employees or whether a secular Diakonia bases its activities on the social and reasonable nature of people or whether believers and disbelievers from different traditions let themselves be embraced by God's spirit and together do what is necessary, is not important in the end, said Aus der Au: "But it is helpful to think about the kind of education we aspire to."

Prof. Dr. Kjell Nordstokke from Oslo talked about "Church and health". After religion was driven from the public sphere by the secular society, it is now returning in post-secular times. This would be the chance for ecclesiastical diaconal institutions to make a contribution as a competent and trustworthy representative of a holistic health care concept. Health is not limited to the body, but must also incorporate social and spiritual dimensions, said Nordstokke.

The opening service on June 14 was held by Dr. Matti Repo, Bishop of the Tampere Diocese of the Evangelical Lutheran Church of Finland. The acting KGK President, Terttu Pohjolainen from Lahti, opened the conference. Heather Roy, Secretary General of Eurodiaconia, and Prof. Dr. Beate Hofmann of the Bielefeld Institute for Diaconic Science and Diaconic Management each held a bible study session. Bethel board member Pastor Dr. Johanna Will-Armstrong gave the sermon for the closing service. Best practice examples from the member houses took up current developments with regard to the topic of the conference. Excursions to the Sarepta Sisterhood and to the Bethel Foundations and a concert at the Zionskirche completed the program.
The 43rd General Assembly of the KGK also took place within the course of the conference. The latest version of the KGK website under www.kaiserswerther-generalkonferenz.org was presented at his occasion. Reference was also made to the next study tour, which lead to São Leopoldo on the occasion of the 80th anniversary of the Mother House of the Casa Matriz Sisterhood from November 6 through 17, 2018. The German houses met prior to the general meeting of the Kaiserswerther Verbande (KWV).