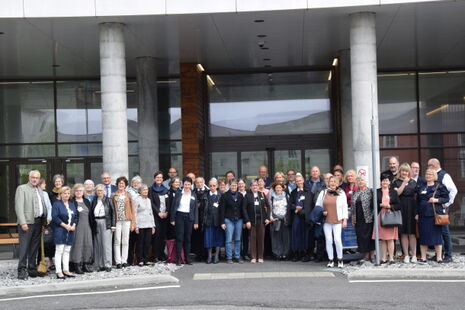 "Sustainability - locally rooted, globally connected in Diakonia" was the theme of the 44th Kaiserswerth General Assembly. On June 9 and 10, around 60 participants from nine countries gathered at the Haraldsplass Diaconia Foundation in Bergen, Norway.

Prof. Miroslav Volf from Yale University spoke about the religious dimension of the sustainability debates. The meaning of creation is the challenge par excellence for sustainable and ecologically responsible living, both as individuals and as societies, Volf said. God created the world as a home for himself and creation, he said. The pressures and demands of modernity on the individual, the reification of the world, and political and economic separation stand in opposition to this, he said. Nevertheless, it is possible to see the other as part of the same home and to live accordingly.

Vigdis Anita Gåskjenn, Chief Financial Officer of the Haraldsplass Diaconia Foundation, presented the con-cept of sustainable finance. Like many European countries, Norway is undergoing a transformation process, Gåskjenn said. With fewer workers for more retirees and more public spending, the transformation to a more sustainable society is happening without financial compensation. Diakonia has an important role to play in this process. The key, she said, is to shift from crisis management to a purpose-driven approach.

Olli Hollström, chairperson of the board of the pan-European diaconia network Eurodiaconia, spoke about the United Nations Sustainable Development Goals and how they are known. The global North does not take the goal of “leaving no one behind” seriously as a self-implementing template for national legislation, Hollström said. Rather, it is seen as the agenda of the global South. In the churches and diaconal institutions in the northern hemisphere, too, the Sustainable Development Goals are hardly an issue, he said. The pan-demic has put a further damper on their implementation, he said.

The former Norwegian Minister for International Development, Dag Inge Ulstein, emphasized the necessary responsibility of the countries of the Global North for those of the Global South for justice.

Best practices from member houses in Brazil, Germany and France completed the conference with pioneer-ing examples and impulses on various aspects of sustainability.

“The Haraldsplass Diaconia Foundation was a great host with matron Rollaug Waaler, who is also vice pres-ident of the General Conference, and CEO Jørn Henning Theis, and the excursion to the health campus im-pressively showed their future-oriented entrepreneurial diaconal commitment”, said General Secretary Chris-ta Schrauf.

The 45th Kaiserswerth General Conference will take place on June 26 and 27 2025 at the Diakonissenanstalt Dresden in Germany.