Study tour to New York 2017: Health Care in the USA 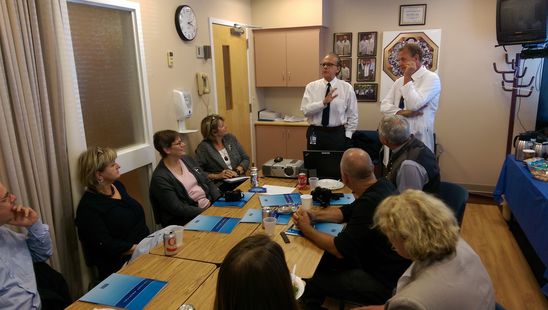 From September 30 to October 7, 2017, a diaconal study tour of the Kaiserswerther Generalkonferenz went to New York City. The goal of the study tour was to gain insights into the American healthcare system and to visit various hospitals, public care facilities, educational institutions and historic health care places.

Among other things, we visited the NYU Lutheran Medical Center, founded in 1883 by the Norwegian deaconess Elizabeth Fedde. Today, it has 5 hospitals and family outpatient clinics at 65 locations for people of various ethnic origins and speaking 73 languages. The merger of New York University (NYU) and the Deaconess Hospital opened new market opportunities due to the synergy of technical and financial resources and it provided access to a new group of patients in Brooklyn. At the Catholic Calvary Hospital, the group was offered insight into the hospital’s specialized health care work as a pioneer institution and the largest service provider in palliative care and hospice work.

The program also included the Bronx-Lebanon Hospital Center. The Center was formed by the merger of two hospitals and locations and is the main non-profit healthcare provider in a neighborhood that is predominantly characterized by poverty and immigration. Another part of the tour was the Blythedale Children's Hospital in Valhalla, a highly specialized rehab clinic for children with multiple illnesses. With space for 108 patients and a turnover of 75 million Dollars, the clinic is one of the flagship operations in North America.

The group also visited the former Ellis Island Immigration Hospital, once the largest public hospital in the United States with up to 450 hospital beds for patients with infectious diseases and around 10,000 patients from 75 countries. The final visit of the tour went to the Ground Zero Memorial Museum for September 11, 2001.