Diaconal study tour to visit the Polish Diakonia in 2016 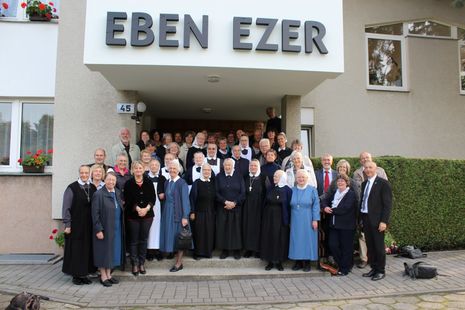 From September 21 to 25, 2016, the diaconal study tour of the Kaiserswerther Generalkonferenz took about 40 participants to Poland. After a visit to Fürstenstein Castle, the tour took the participants from Germany, France, Austria and Poland to the Kreisau community center for a conversation with bishop Pytel and then to the former Mother House in Zabkowice Slaskie (Frankenstein). Following this, the tour program provided the opportunity for a conversation with the head of Diakonia in Poland, retired Bishop Ryszard Bogusz in Wroclaw, the European Capital of Culture in 2016, and for a visit to the former Deaconess Motherhouse Breslau-Bethanien.

A special highlight of the journey was the visit to the former Deaconess Mother House in Miechowitz, the spiritual center of the ‘Friedenshort’ of ‘Mother Ewa’ von Tiele-Winckler. The tour then continued to the old university town and royal town of Krakow.

A "Diakonischer Fachtag" (diaconal study day) was held on September 24, 2016 at the Deaconess Mother House Eben-Ezer in Dzi?gielów. Pastor Marek Londzin, member of the executive committee of the General Conference, and head of the only Deaconess Mother House in Poland had invited us to visit. The retired President of EWDE (Protestant Agency for Diakonie and Development), Pastor Klaus-Dieter Kottnik spoke on the topic: "Current Challenges for a Social Europe" about expectations and challenges for Diakonie in Eastern Europe against the background of experiences made during his work in the Polish Diamonia Council. It is important to expand the good cooperation between the Diakonie in Germany and in Poland, said Kottnik in reference to his personal commitment in the Polish Diakonia.

In Poland, there are no public investment funds for non-governmental organizations such as Diakonia. Accordingly, there is a high demand for care equipment from diaconal stations outside of Poland, emphasized Kottnik. However, in addition to financial aid, the exchange of experiences and expert advice are also of central importance. In many cases, the desire for diaconal commitment comes directly from the parishes, said the former Diakonia president.

The general secretary of the Diakonia of the Lutheran Church of Poland, Wanda Falk, spoke on the development of Polish Diakonia in the past ten years and on the main points of effort of recent diaconal work in Poland. She also talked about the fate of the so-called ‘Euro-orphans’ and about the poverty of old people in Poland.

After a festive service with a sermon by KR Dr. Christine-Ruth Müller, Secretary General of the Kaiserswerther Generalkonferenz, the study tour came to an end with a visit at the Diakonia Educational Center and the Central Office of the Silesian Diakonia in Teschen / Cesky Tesin.